Batavia named a “Best Community for Music” for the second time!

Batavia Public School District 101 has been honored once again with the Best Communities for Music Education designation from the NAMM Foundation for its outstanding commitment to music education. BPS101 joins 476 districts across the country in receiving the prestigious award in 2016.

The Best Communities Music Education designation is awarded to districts that demonstrate outstanding achievement in efforts to provide music access and education to all students. Districts that have been recognized by the NAMM Foundation are often held up as models for other educators looking to boost their own music education programs. 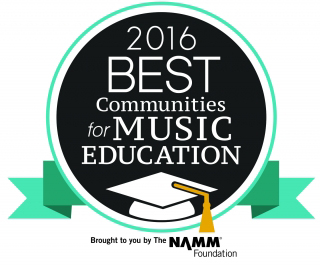 This award recognizes that Batavia is leading the way with learning opportunities as outlined in the new federal education legislation, the Every Student Succeeds Act (ESSA). ESSA recommends music and the arts as important elements of well-rounded education for all children.

“This is the second time in three years we have received this recognition … we must be doing something right!” joked Lisa Hatfield, BPS101 fifth-grade band teacher who submitted the application. “This designation just continues to prove that our students, staff, administration, and community members highly value music education in our schools. It is such an honor to be a part of something that brings Batavia together in such a fun and creative way, while enriching the lives of our students one note at a time.”

The NAMM Foundation’s Best Communities for Music Education Award and the implementation of the federal ESSA law bring attention to the importance of keeping music education part of the school’s core education for all students. It also highlights music’s vital role in students’ overall success in school.

Beyond the Northwestern study, other reports indicate that learning to play music can boost academic and social skills, such as processing math and learning to cooperate in group settings. A 2015 study, Striking A Chord supported by the NAMM Foundation, also outlines the overwhelming desire by teachers and parents for music education opportunities for all children as part of the school curriculum.

BPS101 offers music education from the elementary through high school levels. Approximately 65% of students are involved in some musical ensemble throughout each year. Enrollment numbers have been increasing steadily, and with that has come larger performances and community support.